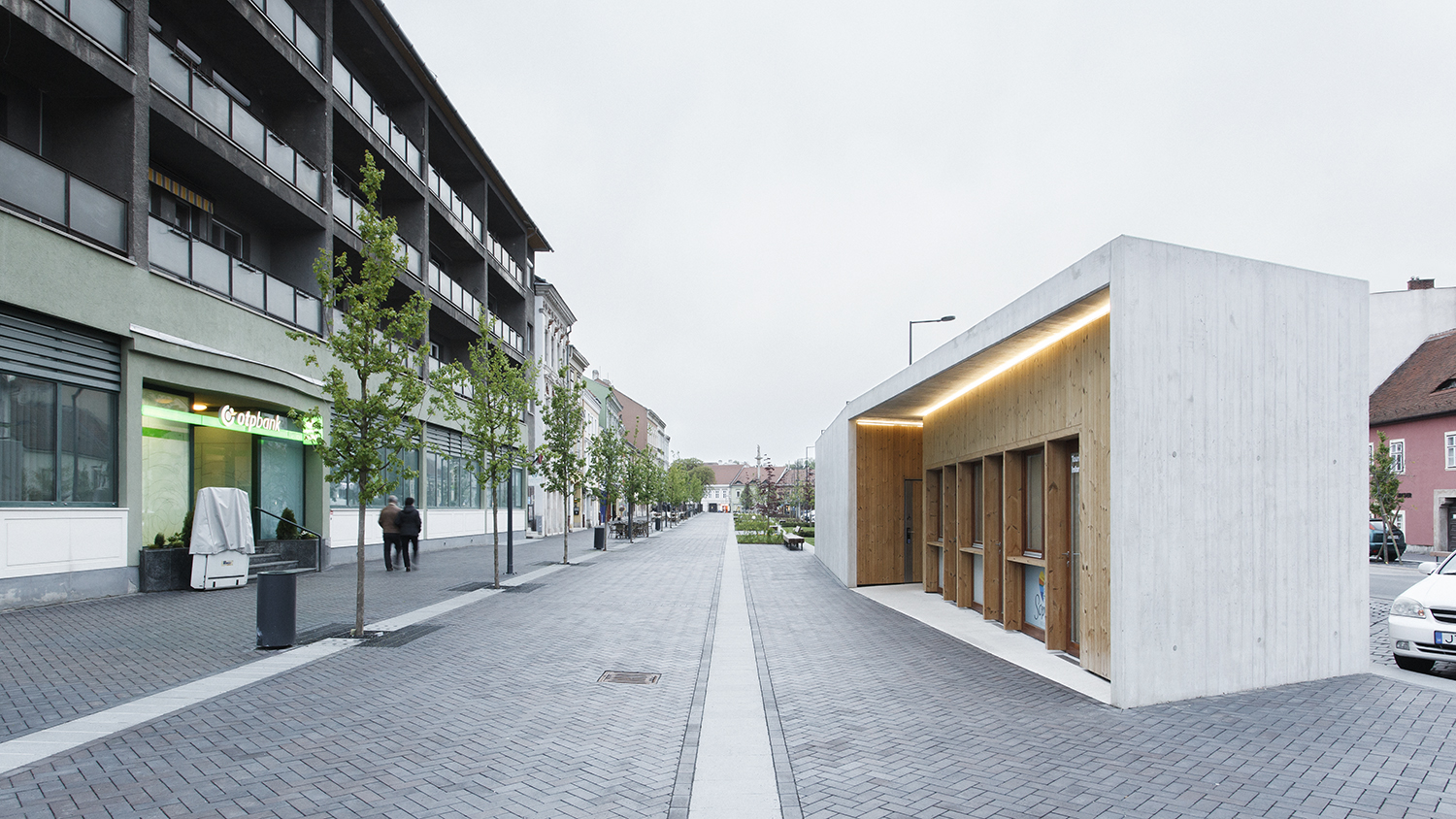 The Castle District of Sopron is a 40-60 meter wide boulevard, which was formed on the outer skirt of the ditch running along the city walls that encircled the former historical core of the town, on the so called glacis slope. Consequently, from direction of the castle walls the row of houses, mostly of Rococo and Louis XVI style built in the 18th-19th century, appears with alternating building height, developed typically on narrow plots. The only exception is one spot where the facade is interrupted by war damages and part of the castle wall reveals as a visual element. The outer row of houses consists of earlier, partly medieval buildings with wider lot divisions, resulting in patio houses that are connected to Castle District with passages. Once long ago – after the development of the surrounding facades – market function was present in this area of historical significance: it gave place to cattle markets or at some parts of it hay markets were held in the middle of the 19th century. In the 19th century, the Castle District was more of a contiguous, slightly outwards sloping area than a boulevard, even though also a tram line was running along it.

Conditions prevailing before the design process of the Castle District’s renewal were formed during the second half of the 20th century. At that time, a traffic system was developed on basis of Pál Boronkai’s plans with retain walls, articulated and separated traffic routes (service road). This traffic-dominated state restricted pedestrian traffic to the minimum and at the same time it longitudinally separated the once contiguous space. Traffic light intersections, service roads, cars passing and searching for parking place restricted pedestrian traffic to a narrow stipe along the walls. Prior to the conversion, actually the whole Castle District was one contiguous parking lot. The generosity of the extremely wide public place, the large and contiguous square worthy of a city was overbuilt and over-articulated: the area was filled with retaining walls, roads and hedges blocking the view. The traditional functional dominance of hospitality and trade on the ground floors of the Castle District houses was not accompanied by corresponding public space connections (e.g. coffee terraces, outdoor catering areas). The architectural elements (historic buildings) of the public space were in poor aesthetic and technical condition, and the area missed a single, integrated image that could have provided the Castle District with identity. The place between the statue of Virgin Mary and the Fountain of Loyalty (=Hűség kútja) is one of the most important public spaces in Sopron. Nevertheless, it was unjustly fragmented and divided by retaining walls and stairs.

In autumn 2009, the city council of Sopron announced a national, secret, open architectural competition with the title „Sopron – Revitalization of the Castle District”. The competition was won by Hetedik Műterem Kft. in collaboration with its landscape designer partner GEUM Műterem Kft. In the course of several years of design work, the first and most spectacular phase of the public space renewal, an approx. 15 thousand m2 large area has been completed by 2015.

The beauty of the Castle District lies in its character created by the continuously changing cross sections and constantly varying spatial relations along almost half a kilometer length; and by the feature that all this belongs to Várkörút (Castle Boulevard), to its dynamism and generosity. This duality, namely the dichotomy of the longitudinal dynamism and cross-sectional diversity is the greatest value that we wanted to strengthen in our plan. The key concept was that when standing at any point of the Castle District one should know and feel that he/she is in this very part of the area. However, moderate approach was also required since the facades of the historic development along the inner and outer curves are determinative urban design elements, thus competing with them for dominance is unnecessary.

After the complete reconstruction of utilities, new street lighting was installed and new pedestrian-dominated surfaces were formed in accordance with the renewed traffic system. Because of the historic environment and the former state, our main objective was to create a pavement with uniform appearance (color) evenly sloping towards the outer arc, providing a noble effect with its use of material. That is why we chose dark-colored clinker bricks and granite stripes ensuring the unity of the spatial structure. The graphics of the latter, like lines in sheet music, were meant to arrange the different features of public space architecture without disturbing the sense of integrity. Due to the public utility network’s density, landscaping and planting demanded great care. While high trees with pierced foliage were designed to the central zone, tree species with smaller canopy were placed next to the buildings – partly in order to ensure a dominant view for the historic facades, and on the other hand because of the different functional requirements of the pedestrian-dominated areas.

A pavilion was built in the area’s center of gravity, accommodating the necessary service rooms and toilets. The building has fine concrete surfaces with board formwork texture, precast reinforced concrete louvers and wood-paneled facades, subtly evoking the materiality of the excellent monumental reconstruction works accomplished in the second half of the 20th century in Sopron.

The first and largest phase of the Castle District has been completed, and now it indicates the direction for further developments of the areas surrounding the city core. The already started public plaza revitalization of the city center will be finished with the renewal of two large connected areas, Kisvárkerület (Small Castle District) and Széchenyi tér.

With regard to the renewed public space, Barnabás Winkler wrote in his review: “Visitors to the city, but especially the residents of Sopron are visibly happy about the revitalized urban district. The Castle District is no longer merely a circulation zone, but it is filled with real urban life … The once intimate atmosphere of the Castle District has returned, being reformulated with modern materials, but preserving the small-town coziness.” (Régi-új Magyar Építőművészet 2016/3)

By continuing to browse the site you are agreeing to our privacy statement.